OMG you guys. Puhleeeze tell me you’ve seen the documentaries about the music festival that never was, Fyre Fest. Not going to lie, I subscribed to Hulu just so I could watch its documentary, Fyre Fraud, only AFTER I devoured the Netflix documentary aptly titled Fyre.  For an emotionally unstable widow, these docs are my kryponite.  I vaguely remember when this shit show all went down (April 2017) but to be fair, I was barely showering back then.  Well after watching the downfall of over indulged millennials, I went down an internet rabbit hole that took me days to get out of.  When I did finally emerge 48 hours later, I knew I had a mission in life. Everyone I know should walk, nay RUN to their nearest streaming device and check these hot messes out. Maybe all the shit that’s happened in my life has led me to this point?  Wait. that’s dark.  So maybe not. 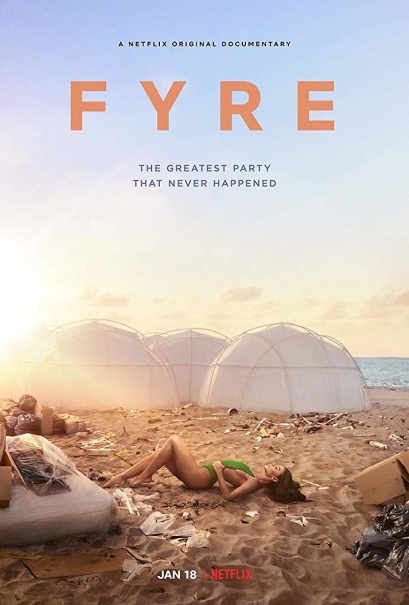 I’ll still keep spreading the good word of the Book of Fyre though.  This is a cautionary tale of what can happen when Ja Rule (R-U-L-E!) becomes friends with this dork ass Jersey Boy named Billy, and their social media personas take over their cognitive decision making skills, or lack thereof.  Aside from the juicy factor, I feel like this is really a social commentary on the FOMO culture of the 21st century.  All the hype and build up and buzz around this music festival was just a facade, and ultimately led to its downfall.

There isn’t an insta filter strong enough for this wasteland.

That’s just me getting all deep and cerebral about a juicy gossip story.  Maybe this resonated with me so much because my grief and subsequent depression makes me feel like people’s shiny happy social media lives have been turned up to 11, and I constantly have to remind myself that I’m not the only one with a less than an American Dream reality.  So when the curtain is pulled back, and the private yacht-luxury villa-sushi-Pablo Escobar island-fantasy was just that, a fantasy, it was more than just a little satisfying.  I honestly feel like Josh is all of us when watching these documentaries.

Chicken soup for the middle-class soul is right! You know everyone grieves in their own way, and I’ve been told over and over by “experts” that there’s no wrong to grieve.  So I guess I can add smug realness to my box of therapy tools! Any moments of the day not spent thinking about my life or doing the “hard work” of moving foward, or “being strong” are moments I cherish.  So these collective 3 hours was time well spent in my book.  I would love, love love to discuss all the amazingness that was Fyre Fest in the comments. Until then, I’m going to go look for my glamping villa, I mean FEMA tent now.